Putting aside for the moment the whole, AFC-Telford-are-not-strictly-speaking-Telford-United debate, here is our rundown of the Top Five moments (for better or worse) against the men from Darwen.

Before we crack on I must make it clear I have done next to no research.  I haven't consulted my Poppies result database (a.k.a. sent Cookie a text).  I haven't waded through several boxes of catalogued programmes doing a good job of lagging the loft.  I'll resist plunging into Wikipedia.  I may even be forced to make some of the facts up entirely.

With all those provisos in place, let's plunge in with -

Can't remember the game at home to Telford at all.  Not a detail.  Nada,  The fixture only remains in the memory because England legend Gordon Banks was the Telford Manager.  OUR World Cup winning goalie was giving a team talk from  OUR cluttered away dressing room!  Wow.

You have to bear in mind, this was just over a dozen years since England had actually won the World Cup!  "Thirteen Years of Hurt...."

After the completely forgotten game, small groups of us presumably parka-wearing herberts were allowed into the plush inner sanctum of the tiny Director's area in the Main Stand to meet Gordon and get his autograph.  I remember distinctly the Gordon was very pleasant, and seemed very old (he was, in fact about 10 years younger than I am now!)  He signed my programme and I thanked him with a polite, "Thank you Mr Banks", which means he is the only person I've called "Mister" outside of Senior School.

Within a year Gordon had been sacked as Manager, and offered the slightly less exalted position at Telford as raffle-ticket seller!  Can you imagine that?  Getting your Klondike ticket from a man who had lifted the World Cup?  A situation that the word "indignity" was invented for.

Under the steady hand of Peter Morris we launched our usual tilt at the title that wilted with the coming Spring.  Depending on which Poppies fan you ask, and how much they've drunk, at Christmas, leaving York Road after beating Boston United we were somewhere in the region of 13 - 30 points clear at the top of the league.  The League committee were already tying red and white (remember white?) ribbons to the Championship Trophy.

Somehow, a couple of months later, we were practically out of the running when Telford United turned up at Rockingham Road.  It was imperative we beat them to keep in touch with Barnet, so Peter Morris would have fired-up the lads to go at them from the off.

Five minutes later and we were already 2-0 down and slithering our way to a 5-2 reverse, which effectively ended our interest in the Title, but gave PATGOD a new term to describe a crushingly, improbable let-down - "The Telford Day".

Just before Gary Johnson's cavalier approach to football (the rarely used 1,0,9 formation) started paying the expected dividends of stonking defeats, his adventurous tactics served up a 4-3 victory at Bucks Head.  We couldn't defend for toffee, but we had Carl Alford in his pomp as the apex of our 9-man attack.  So late into the game that the supporter coach was revving its engine, Big Carl bundled all 11 Telford players, the crossbar, 2 ballboys, a photographer, and, most importantly, the ball into what remained of the net.  Thankfully the ref was sufficiently keen on his shower and expenses he turned a blind eye to the carnage and blew the whistle to end the game rather than give a free kick.

Sometime the turn of the Century

Telford stood between us and a long overdue return to Wembley.  Future scummer Gary Setchell, in the one moment he will always be remembered fondly for, gave us a 1-0 first leg lead at Rockingham Road ahead of the return game.

For the first, and probably the last time ever, I found myself happily queueing outside Rockingham Road at an ungodly hour to make sure I could secure a ticket for the second leg.  Passes-by goggled at us as the line of sad bastards snaked down the Rocky Road carpark onto the main road itself. At the appointed time a club worthy finally arrived with breakfast egg down their tie and we trooped through to get our tickets.

The second leg is only remembered for the tension, the astonishing absence of home fans, and standing on the pitch at the end, not quite sure how to celebrate.  No actual football as such.

We were well and truly in the nose-dive which led to Imraan playing silly-buggers with James Caan, CVA, George Rolls, & an empty-Nonce Park.  We trundled over to the New Bucks Head expecting nothing except a good thumping and bland, over-priced burgers.

This was the game when former guru Mark Cooper returned for the second stint with the Poppies.  A blink-and-you-missed-it one game tenure.  Rumours were rife that a shadowy committee of investors, with Mark to the fore were about to put us back on the road to glory.  Today's game was a rehearsal for the new regime, with Cooper as boss and Cooper Senior as Chairman.  Watch out World - the Poppies were on our way back!

Needless to say, none of this happened, except for the defeat and the bland, over-priced burgers of course.  Presumably Terry Cooper found better ways of flushing money away rather than ploughing it into the Non Park black hole.  Son Mark chose the dole over slicing the half-time oranges for us at a second game.  And yet.....

And yet....During the first half the team played with a freedom we hadn't seen for a while.  A smiling JP put us 1-0 up.  The sun shone.  Dave Singh, ever the optimist, declared we were watching "Championship winning football".

The second half saw normal service being resumed.  The sun went behind clouds.  We shipped goals like they were going out of fashion.  Cooper hauled a scowling JP off the pitch.  Dave Singh, ever the pessimist, bemoaned the End of Days.

The slow motion train crash that was the Poppies under Ladak continued towards the buffers of oblivion.....

And there you have it.  Five more of less accurate memories of Telford.  Some good, some bad.  Somehow we are still around to do it all again and see which was today's game will go.  Assuming their team coach doesn't roll-up to Rockingham Road that is.

Wow, who'd have thunk it?

Least surprising news since the report that rain is wet, politicians are corrupt and most Poppies Chairmen don't know their arses from their elbows......

A Taste of the Good Old Days

Telford at home on Saturday.

Once upon a time such a statement would have been common or garden. Telford?  Again?  Yawn.

Four years down the line from our "fall", teams like Telford have a acquired a sheen of glamour way beyond what their standing as a club deserves.  For the past half dozen years they have cemented their position as the 25th best team in non-league.  Too good for Conference North, but not good enough for Conference National.  They have been yo-yoing happily until this season, which finds them currently rock bottom of Conference North, behind such footballing Titans as Chorley and Curzon Ashton.

Nevertheless, for a club of our reduced circumstances, Saturday's game represents a big day for us.  We all feared it would prove to be a big day for Mr Plod, but thankfully they seem to have either decided not to demand saturation policing, or have simply forgotten us.  It also represents for Telford their first view of Latimer Park and a salutary lesson what can happen to clubs when their stadium is stolen away by circumstances and third rate businessmen.

AFC Telford, along with numerous other "AFC's" and other reconstituted clubs have had the enormous good fortune to be able to walk straight back into their grounds when they have started again.  Sure, re-starting a club is probably difficult.  We certainly know that keeping a club going is hard enough.  But the job is undoubtedly made a lot easier when your stadium remains available to you from Day One.  Take a look around.  Before you gird your loins for the first chant of "Shit ground..." had your old ground not been available, this could have been you.  An awful lot in football comes down to luck.


Rather than waste time and effort slagging off this pointless sport again, we've decided to just link you back to what we wrote for the last World Cup.  Christ, we've been going too long.......

Simply substitute The location from "Mordor" to "England".  And insert "12" years since England won it, rather than "8" (don't worry Rugby fans, you've still got a way to go to catch up with us long-suffering football fans!)

Everything remains the same.  With knobs on.

http://patgodonline.blogspot.co.uk/2011/10/rugby-world-cup-whats-that-when-its-at.html
Posted by GL at 16:35 No comments:

Every Poppies fan slept a little easier last night, after our FA Cup campaign purred into life with a comfortable passage into the 2nd qualifying round.  Just two more wins and we could be in the hat with Boreham Wood or Bromley!

Whilst few expect us to actually win the competition, it would be nice to go deep into the qualifying rounds - maybe even progressing as far as hearing our name in the classified check again.  And just as importantly, adding a few more goals to our tally at the top of the all time leader board.


We need to keep Villa where they belong, firmly in second place with just their solitary European Cup as consolation. We certainly don’t need a repeat of their unexpected run to the final last season, which almost nibbled our lead down to single figures before they gave Arsenal about as much of a game as we would.

Thankfully they’ve since sold their only decent striker, and already have an extra 5 goal deficit which is bound to heap extra pressure on their unprolific forward options. 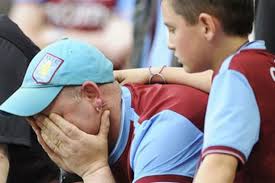 The Holte End reacts to the scoreline from Market Drayton
Posted by PW at 18:08 No comments: