Enough of the niceness, already!

When did football become so "nice?"

Post match you couldn't find an Aldershot fan who didn't think we were a credit to our league (whatever league it was), and thought we gave a good account of ourselves, and on another day might have forced a draw, etc etc.  Our support was more numerous and more noisy than most teams they play, blah, blah.  We should win our league at a canter......

In return our fans thanked theirs for the hospitality, and spent more time shaking hands with the home fans than watching the game.

What's wrong with all you people!!!

What's wrong for a bit of verbal rough and tumble?  What's wrong with picking on an opposition player for absolutely no reason and abusing him in a cruelly ironic way for 90 minutes?  Or single out an opposing supporter for a bit of brusque banter?  Or singing a song about the opposition Manager's bags of sweets and cheesy smile?

I didn't hear one bloody chorus of "Shit ground....!", or "In your Aldershot slums... (mind you, that one hasn't been heard since 1981).  And no one was threatened with getting a lift home in a Kettering (or, strictly speaking, a North Hampshire NHS Foundation Trust Ambulance) ambulance.


When did we all become so bloody meek?!?!

Mind you, the pitch was the best I've ever seen, the steward I spoke to was absolutely darling, and their second goal was a thing of beauty.......

So Aldershot, we meet at last.  We didn’t quite get to know each other when you were the original phoenix club, working your way back up the pyramid. By the time we had made it back into the Conference, you’d gone a step further, and by the time you dropped back, we had fallen down a rabbit hole.


But though we’ve never met there is a connection that we’d probably both rather not talk about.  Does the name Brian Talbot mean anything?  Thought so. You sacked him not long before the old club folded and he next popped up at our place, providing a short lived cover story for his ‘business partner’ Mark English. Maybe that name also rings a bell.  It was a long time ago but I’m pretty sure he was also sniffing round the old Aldershot near to the end, probably trying to figure out how many of his relatives he could get on to the payroll, and the likely benefit if he siphoned off the bar takings.


Ah happy days.  In a where are they now, we’re happy to reveal that after that brief spell at Kettering, Brian Talbot spent several years taking part in a controlled experiment to establish the lowest IQ it is possible to own whilst mastering simple hand tools and promoting a plastic vanity project to the Football League.  He now works as a scout and is close to acquiring his woodcraft badge.  Mark English, meanwhile, still lives in Essex and is keen to return to football once his 99 year FA ban expires.
Posted by PW at 22:34 No comments:

Another home fixture and another hundred away from the winning Klondike number.  I managed to compound last week's gambling misery with an evening at the Trust / Dylan Cecil Memorial Race Night, which offered me an opportunity to lose an even thicker wedge of my disposable income.

An opportunity, you won't be surprised to hear, I duly took.

As much as I bemoan my abject lack of any sort of good fortune with our beloved half-time draw, even a jaded grouch like me wouldn't begrudge my (hefty) contribution to such good causes.  Or at least not now I've given it a week before commenting..... 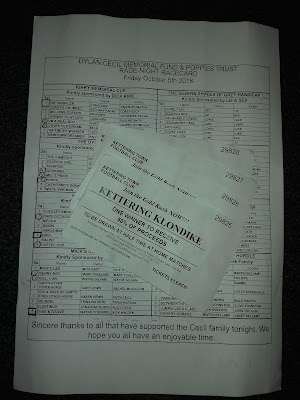 Six years ago to the day, ten footballers representing Kettering Town FC slunk off the pitch at Non Park after a 7-0 defeat to Bashley in front of just over 300 people.  It was less a game of football than a 90 minute open-air wake for the football club we loved.  To all intents and purposes that was it for the Poppies.  There was lots of gallows humour, and more than a few tears.  Not only did we think it was all over, it FELT that it was all over.  Curiously, I don't recall any anger or resentment - I guess we were past recriminations by then.

Six years later we are top of the same division we were about to be thrown out of, and a move back to Kettering is on the agenda.  Had this position been offered to any of the 304 in attendance at 4.45pm on Saturday 6th October 2012 every single person would have taken it in a heartbeat.

You know where you were on 6th October 2012, and how you felt.  This is how we felt at the time, and why, in the years that followed we've never quite treated everything Poppies related as a matter of life and death.  Because we were that close to losing everything.