It's not often we get summoned to Latimer Park at a few day's notice to get an update from the club.  Well, ever, actually.  This has led us to fly straight past the "speculation" stage right to the "what shall we name our new ground" stage.  And who could blame us?

The club admit this is an update on the ground situation.  At least a couple of Borough councillors have hinted something about a land sale.  Cllr Michael Brown, who has seemingly waged a one-man war on our behalf with his fellow councillors, has announced he'll be at today's meeting.  People who know nothing about the Poppies give you very specific details about what's going on that they have over-heard.

Well, we'll hopefully all find out at 1.00PM today.   I daren't imagine the reaction if the news is not good.  But let's look on the positive side.  Hard for a Poppies fan, I know.  But let's try?

If there is news about land being made available, closer to the heart of Kettering, it will undoubtedly be brilliant news.  If this is the case, I just hope we all don't get carried away.  A piece of land is a long way and a lot of money away from being a football ground.  Particularly if the piece of land is situated in the Weekly Glebe area as has been suggested many times.  The fields around there have no electricity, gas or sewage connections.  Nor any meaningful access at this time.  And, if all this is overcome, there's no way a second Rockingham Road will rise there (which I fear will disappoint appreciable numbers of supposed-supporters who have stopped coming).  That's not how modern non-league stadiums look.  No-one builds stands that can hold twice their average gates!

But look.  I've managed to get ahead of myself!  Let's see what happens today.  Let's cross everything and get to Latimer Park.  Excited?  You bet. 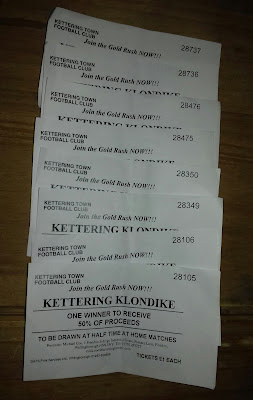 By doing this I thought to outfox the efforts of the usually upright club officials, who, seemingly only resort to underhand tactics to prevent me claiming my rightful half-time draw win.

Thus far I need to report that they seem to continue to hold the whip hand, but this race is a (bloody long) marathon, not a sprint.....

Not normally one to brag, but I happen to know that Leiston is an actual place, and physically exists.  Not only do I clutch this knowledge protectively to me like a mother Koala bear with her offspring, but I can go one better.....


I HAVE ACTUALLY BEEN TO LEISTON!!!

Having heard of Leiston ahead of them appearing in our division this season would have put me in quite a select group at Latimer Park, but physically having walked their streets must make me an almost unique beast amongst my Poppies peers?

Yes folks, Leiston is real and I have been there, and know it to not be a made-up entity, like Lilliput, Atlantis or Thrapston.  My good lady and I stayed there for a couple of days in the mid-noughties as a kind of Christmas-time romantic getaway.  With the ability to make such grand romantic, moderately-priced, gestures it can be no surprise we are still very much together all these years later.

Some people would gravitate to the painfully obvious "romantic" destinations of Paris, Rome or Barcelona.  But, tell me, what do they have that Leiston in December drizzle doesn't have?  Admittedly I recall nothing of Lesiton other than it was shut, and that the shingle beach coastal walk from Sizewell to Aldeburgh is bloody hard work.  But, still.  I've been to Leiston, and the chances are, you haven't.  So there!

We’d like to add our congrats to Brett’s achievement in hitting his hundredth goal for us last weekend. Officially described as ‘first class goals’, a pleasingly old fashioned description which presumably includes goals scored against Oxford and Cambridge Universities and touring sides.  Plus in the BigFreeBet.Com League Challenge Cup.


Thanks to the Records page on the official website, we know that Brett is only the 12th player in our long history to top 100 goals and the first since Roy Clayton in the 70s. Fine company indeed. And wasting no time, he quickly took fresh guard and put away his 101st en route to an inevitable double ton in around 2033.


We might have thought we saw peak Brett when he scored away and home against Notts County to help us on our way in 2008, but that was before the amazing late career flourish that netted 22 as a defender/stopgap midfielder last season. Helped, admittedly, by an incredible penalty conversion rate after we finally realised that under our noses, all these years, was a man with ice in his veins from 11 yards. In fact, had he landed that gig a few years earlier, we might be talking already about a club record.


Whilst there was a lot of fuss (perhaps fairly) about another centurion in the last few days, something that has been 15 years in the making is a remarkable achievement and perhaps never to be repeated. Well played Brett.


A failed attempt to steal Brett's limelight
Posted by PW at 21:29 No comments:

Why I almost feel sorry for Martin Bellamy

By any measurement of a contented life, Martin Bellamy seems to have it all.

Working at the football club he's always supported, fuelled by as much and as varied beer as he wants, all (presumably) under the benevolent eye of a very understanding spouse.  He knows everyone and everyone knows him, and he uses his belligerent charm in the furtherment of the Poppies.

But, he has a fly in his ointment.  A stone in his shoe.  A floater in his jacuzzi.

Last season he had to make weekly excuses for the incredibly s-l-o-w arrival from the Far East of the replica shirts.  How many different ways could he say, "We're still waiting for them!"

Then, this season happened.  At least the replica shirts arrived by a ship powered by engines rather than be paddled across the oceans by a one-armed rower.  Hallelujah.

And then people tried the shirts on.

I'll be the first to admit that not all Poppies supporters are the picture of health and vitality.  Plenty of six-packs, but very few SIX-PACKS, if you get my meaning.  Even so, the new shirts are coming up so small that everyone trying to make a purchase was pretty much needing to add a couple of sizes to their usual requirement.  This is OK when you start as a medium, but what do the rest of us do who, on a good day are an XL, and the other 364 days of the year a smidgen larger?

Martin spent the home game with Bedworth swapping and juggling these tiny shirts to try and keep the punters happy.  And he's got similar days to come for the next few home games.....He must really hate replica shirts!
Posted by GL at 10:53 1 comment: