The painful joke of the "Premier League"


In this country we put up with a lot when it comes to our top level football clubs.


All these indignities and more are heaped upon supporters.  And most are content to take the abuse because the top clubs generally do well in European competitions.  Now, after it would appear that our Champions League contingent may well be quickly reduced from 4 to 1, that even that crumb of comfort has been taken away.

So, what does our fellow supporter of a Premier League team have to look forward to?  Shelling out an arm and a leg to fund a bunch of super-rich foreigners, playing under a dodgy chairman, whilst waiting, with dread , for a bunch of Premier League substitutes and squad players take the nation's hopes with them to Brazil.

Suddenly not having a perfect view at Latimer Park doesn't seem too bad, does it?
Posted by GL at 21:51 No comments:

I can't understand what all the fuss is about fitting 96 fixtures in the last month of the season!  Players are supposed to be fit, so what's the problem?

In fact, if you study the fixtures on the link above you will spot, as I did, that our lazy-arsed players have a FULL WEEK OFF between the 5th and 12th April!

Bone-idle sods.... Get 'em in for extra training!  Stop them getting too flabby!
Posted by GL at 18:40 No comments:

The Magic of the County Cup


County Football Associations are a bit of a throwback to a bygone era of small boys up chimneys, rickets and regular wars with Germany.  What exactly, in 2014, does a County FA do?  When was the last time the Northants FA did anything?  And I don't just mean for us!  For anyone?  We play in the Southern League and various National FA competitions.  How does our local FA impact upon this?  The answer, obviously, is that doesn't.  It does nothing.  Oh, except giving Shoey a job!

The only time the Northants FA rears it's ugly head is when we are compelled to play in it's shoddy cup competition, which absolutely no-one wants to compete in.  A pointless fixture, or if you're unlucky enough to win, fixtures, grafted onto an already busy programme.

And to layer on even more insanity, these nothing-games take priority over your league fixtures.  Usually this is a bit of a joke.  This season, with clubs weighed down with a backlog of fixtures, pointless County Cups are even more of an extreme pain in the arse.

Next Tuesday our rearranged fixture with Ashford has been trumped by their continued appearance in their County Cup competition.  So, a game which means something, and would have been (hopefully) attended by several hundred paying spectators will be replaced by a game that means zip, played in front of less spectators than players.  Both clubs are trying desperately to play postponed fixtures, and both are forced to give in to the needs of the Middlesex FA.

And Middlesex isn't even a real county!!!

We are told that this is just the way it is and we must lump it.  This would be fair enough if the priority given to County FA Cup competitions was extended to everyone.  But I don't remember hearing Fergie ranting too many times in the past about having a European Cup Semi Final cancelled in favour of a local cup fixture with Droylesden.  Or Wenger slapping his wrinkled forehead when forced to let Real Madrid know they would have to postpone their tussle in favour of a County FA Cup tussle with Enfield.

Poppies Away to Chertsey

Club: Chertsey Recently-On-Sea FC
Nickname: The Mariners or the Atlantians


Directions: Load your boat with supplies, including fruit and ship biscuits.  Steer South by South West for 100 nautical miles.  Avoid the Sirens of Staines.  Splice the mainbrace.  Pick out a particularly pretty cabin-boy for the voyage.  Unfurl the jib-headed topsail and cast off.

The club are running a supporter's barge to this fixture.  It departed from the Kettering 2 weeks ago.

Away fans will be allocated the upper branches of the trees overlooking the south shore of the ground as well as half of the supporters club roof.

Recent Results: Chertsey have suffered recent reverses at the hands of Poseidon, Jack Sparrow and his Black Pearl XI and the shark out of Jaws.

In the absence of any football for the foreseeable future we may as well talk about the weather. Why not – it’s why there’s no football.  As each week dumps a month’s worth of rainfall on this saturated island it’s surely only a matter of time before the authorities are forced to move on from marooned villages and submerged railway lines to confront the real issue – will the Calor League season have to be extended?

While they ponder that, it continues to tip down. The River Ise has swollen to record levels, and in places is reported to be over 5 feet wide. No wonder Wicksteed Park is a muddy mess. Well at least that’s the current excuse. Meanwhile at Irthlingborough the ugly old troll who lives under the bridge has been forced to decamp into a nearby Travelodge, bringing temporary relief to the townsfolk. In my part of the world (Worcester) things are even worse. The Severn burst its banks so long ago, the local Ordnance Survey map has been redrawn. New Road cricket ground is under several feet of water, though it’s just been announced that there will be an umpires inspection. In July.  Could things get even worse? Well yes, at least Cameron hasn’t visited yet.

Meanwhile our Poppies heroes must try to deal with this extended mid season break so they are raring to go when league action finally resumes. Assuming they haven’t all retired by then. 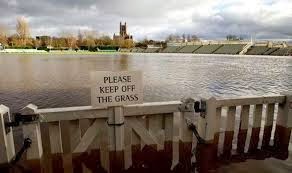 And you thought Latimer Park was bad
Posted by PW at 21:30 No comments:

Belated end to the "Crane" controversy

The screenshot below shows the infamous Crane captured by Match of the Day cameras during the Bristol Rovers win.

Given the image came from the back of the stand at Rocky Road, I trust that, given the height of the damned thing, it nails once and for all that the crane was at Newlands / Newborough rather than a couple of miles away, in a dip down at Pytchley Road.

Or is it the crane at the top of St Mary's Road? AAGH! 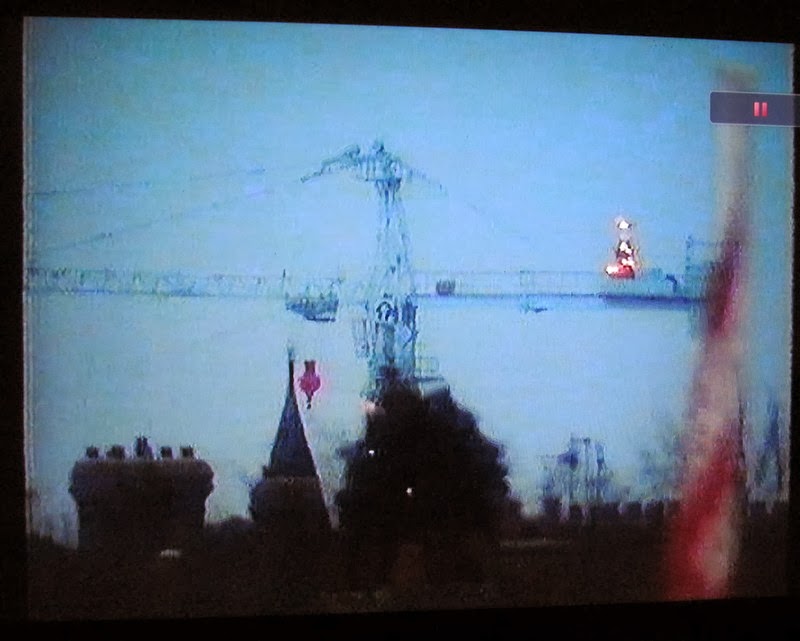 Take that Doc Martens!  Up yours Irthlingborough!

The BBC have released a promotional photograph of the new Dr Who Peter Capaldi.  In keeping with the Northamptonshire link to the series (previous Doctor, Matt Smith being from Northampton), it was stated that Capaldi's boots were Doc Martens.

Diligent research by a dedicated team of uber-nerds soon found out that the boots in question were not in fact Doc Martens, but made by Loake Bros. from Kettering!


In your face Inbreds!

If Capaldi's Doctor is anything like his Spin Doctor, expect these bovver boots to see plenty of action!

Who gives a f*ck about the Somerset Levels?

If you didn't know differently, the hysterical media coverage of the flooding of the Somerset Levels would suggest that the entire population of Burrowbridge had died by drowning.  All dead.  No survivors.  A whole population wiped out.  A nation mourns.

Imagine my relief when the news report finally made it clear, after much wretched hyperbole, that no-one had died.  Or been injured.  Or even got too wet.

In reality, people living in a village in an area where, historically it has always been a watery swamp, have, for reasons no-one can understand, been flooded out after 30-days of constant rain.  A mystery to everyone!  And because of this we are treated to a daily diet of images of biddies in boats and former townies, wearing farmer-chic clothing, moaning about the lack of Government response to their plight.  And as much as I'm happy to jump on the bandwagon of mocking an uncaring, cold-blooded, Tory Minister, specially bussed into the area to show Cameron's caring side, I'm not exactly sure what ANYONE can do for a village at the bottom of the world when a hundred years worth of rain falls overnight!

And when not showing us the bloody Somerset Levels, TV shows and re-shows the sea front at Aberystwyth being battered by high tides, and throwing sand and shingle all over the promenade.  But why?  The only people put out by Neptune's attempt to reclaim this almost-impossible-to-spell town are Taffs and tons and tons of students.  So, who gives a damn?

Particularly when these stories are compared to the continued wallowing misery of the Poppies being unable to get many games played since Christmas.  How can losing all your possessions, and suffering thousands of Pounds worth of damage to your house possibly compare with us not being able to moan at a bit of kick and rush football, played at an out-of-town, uneven, paddy-field?

The Somerset Levels, or rather, Burrowbridge on Sea, don't know the meaning of suffering!