FIFA to punish Scotland and England over Poppy display


....the article suggests a fine, rather than points deduction is the likely outcome.

Wow - what a shock.  FIFA has its hand out again!

Perhaps we should just have bunged them a back-hander to begin with. 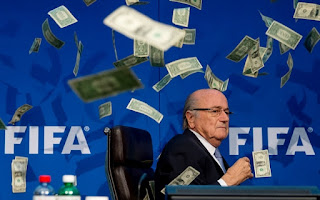 The night of June 23rd.  History in the making.  Britain votes to leave. Lindsay Lohan has a pop at Kettering.


"#REMAIN Sorry but #KETTERING where are you" she tweeted in derision at this obvious example of Nowheresville UK, the kind of insular backwater that would turn its back on the wider world.


Amazing to think that the Herbie: Fully Loaded star was capable of such insight.  Clearly a lot better informed than many suspected.


But trust good old Philip Hollobone to bristle at the slur, demanding in Parliament that the offending celeb, best known recently for extended spells in rehab, drug violations and sundry other felonies, “redeem her political reputation” by switching on the town’s Christmas lights.


Anyway, on hearing of this she agreed. Then forgot about it 5 seconds later and fired off another tweet about Syria or something.


Months passed.  Kettering BC waited patiently for her people to get in touch to firm up arrangements.  Nothing.  Phil tried to help but admitted “it’s simply not been possible to track her down”.  Always a challenge when dealing with someone so famously reclusive and publicity shy.


Could it be that she was really going to disappoint her legions of blank eyed teenage fans in NN15, and pass up the opportunity to flick the festive switch?


Luckily there’s a happy ending to this shallow celebrity tale.  KBC reached deep into its book of contacts and pulled out an absolute cracker who, by a happy coincidence, was already booked to appear in the local panto!   Who needs Hollywood when you’ve got this kind of glamour!!

....among the online, angry teen community.

Most online contributors on "Marcus Must Die", sorry, KTFC Chat, seem genuinely annoyed that THEIR team has won a game.

Perhaps time to lose the photo from the top of the Facebook page, unless "Loyal Poppies" is meant to be ironic?

Spare me from the whiny few!

The most casual of glances over the various online Poppies outlets will confirm just one thing - the majority of fans want Law out.

The opportunity to bitch online has opened a whole new horizon of bellyaching to the average Poppies fan.  Once upon a time the only outlet we had for displeasure was to grumble loudly at the final whistle.  And then go into the Social Club and moan a bit more about a club we continued to fund with our ale purchases.  An hour later and Mick Groom had our names down to go on the Pirate coach to Barrow the following Tuesday evening, using up a day's holiday and spending another fortune in the support of the Poppies.

That was how we complained about stuff in the good old days!

Except for the one time we actually held a demonstration against a sitting Poppies manager.  Yes, my motley collection of whiny Keyboard juntanistas, we Poppies fans made the effort to go to the ground and demonstrate!  That's right. We put on our warmest winter clothing and walked up to Rockingham Road on an evening that there was no game, and noisily protested outside the ground during a training session.  I imagine our current generation of whinging ingrates will find this difficult to comprehend, given that not all of them can even work up the gumption to attend our games, let alone choose to make our feelings of despair known on a night when there was no game at all.

Admittedly, this was the only time in my years supporting the Poppies that I can recall this sort of thing happening.  It occurred during the fag-end of Peter Morris's second stint in charge.  We were still smarting from an FA Trophy humbling at the hands of Histon (who back then were at least 35 leagues below us), and far too many reverses in the League to handle.

Reaching the Trophy final the season before had bought Morris a little more time, but no amount of papering was going to cover the gaping cracks of his managerial frailties.  The Saturday before our famous one-off demonstration there was a slight dry run where a perhaps twenty of us put down our pint pots in the Social Club and marched the dozen or so steps to the directors entrance in the main stand to register our discomfort with the Morris regime.  I can't remember which club worthy headed us off at the door, but we bleated politely to him for a few minutes before returning to our drinks.  And then, more than likely, booked our seats for the following midweek away game at Dover.

About the same number of we malcontents turned up for our actual demonstration.  Once assembled we did have a few moments of hesitation when it dawned on us that we didn't really know what we should be doing.  Never having demonstrated before we had no clue how we should go about it!  We eventually managed to shout a few chants which were balanced between support for Kettering Town Football Club, mixed with our opinions on Morris's shortcomings.


I doubt our effort made much impact, but within a week or two we were gumped at home by Morecambe, and Mallinger finally pulled the trigger.  The tragedy being that had he dismissed Morris a week earlier we might just have avoided relegation, as the team eventually came within an ace of pulling off a great escape.

One real, honest-to-goodness demonstration in the past 30-odd years.  Not really much of a record is it?  And, looking at the quality of our young, and not-so-young malcontents these days, who prefer to complain by emojis, unlikely to be added to any time soon.