Right or Wrong to celebrate the distress of others?  We're going to vote "Right" or this would be a very short piece!

The Top Two clubs in the County wind-up their seasons tomorrow, although I still can't quite believe little old Brackley make up half of that particular grouping.  Other major Northamptonshire Non-League clubs' seasons also came to a sudden, inglorious ends over the past few days.  While we enjoyed a few drinks, basking in a sunny day in Banbury, others weren't having such a good time.

Corby manfully managed to snatch consecutive relegations, or at least until the end of season horse-trading at the League get together may reprieve them.  Droping two divisions in two years is pretty impressive,  Not quite as impressive as when we managed to plummet THREE divisions in two seasons,  but still not bad, as they have managed it under their own steam, entirely on merit.  Or lack thereof.

For the first time in half a dozen years Corby Town have reverted to their accustomed place in the footballing pecking order; namely looking up at the Poppies with the usual mixture of anger, bitterness and Irn Bru.

And to be honest, I'm pretty sure Corby enjoy it this way as it feeds their inferiority complex and need to be suffering a gnawing sense of injustice.  Bless.  I hope their Council builds them a new stadium to cushion the blow of being officially shite.

AFC Scum-Lite failed at the Play-Off stage again, and are in danger of acquiring a new nickname of "The Bottlers".  Being the best supported club at their level isn't doing them a tremendous amount of good.  Can you imagine the grief Marcus would get if we had the best attendances and couldn't get out of a glorified pub-league division?  He lives in fear of being hung, drawn and quartered simply for not shaking hands with people who have been screaming for his dismissal solidly for 10 months.

And yet, Andy Peake is being hailed as some kind of hero for scraping into the play-offs and then losing them again.  A round earlier than last season.

Have Scummer-Juniors hit the "wall?"  Will 30-mile rounds trips from Rushden (presumably where the majority of their supporters hail from, even though they've not played there yet) to Kempston thin their support further?

I guess we'll find out when this nonsense begins again in barely 80-days time....We really must get better, fuller lives for ourselves.

Getting close to seasons end.....

.....and judging by elements of our support who are camped out on Facebook, it can't come a moment too soon.  Having suffered through the absolute worst season in Poppies history (finishing 9th in the league and winning the County Cup) many fans seem to be heading into the summer break questioning their continued allegiance to the club.

And who can blame them?

Does any club that doesn't win their division every year deserve to continue to exist?  Why should they?  If a club can't guarantee silverware surely they should be wound-up on the first Sunday after the season finishes?

Why can't football clubs understand the very simple fact of life that they must guarantee only two things - wins and promotion.  That's all.  Nothing else.

No-one wants to worry our waverers any more than this apocalyptic season has already disturbed them, but, and whisper it quietly, we have no guarantee of promotion next season either!  Not only will we still have the clubs in our division we couldn't beat this season, but our opponents will be augmented by all or some of the following clubs - Hereford, Salisbury, Royston, Farnborough, Margate, Worcester, Corby and the Scum-lite.

We will no longer be able to bask in the comfortable certainty of being a "big club" in a small league anymore.  For reasons I've never quite understood, too many of us seem to believe we are a fallen giant, simply awaiting our day to rise again.  Really?  We managed to squeak an average home attendance of just over 500 this year.  Hereford averaged over 2700.

And the lower reaches on non-league football, below Conference National (for us oldies) are awash with other, REAL fallen giants.  Stockport County still average over 3000.  Kiddy, Darlington, and Halifax all average over 1700 for home games.  Made-up clubs such as Fylde and FC United average about the 2000 mark.

Old friends Boston, Telford, Ebbsfleet and Altrincham all average well over 1000 per home match, even though Alty are rock bottom and about to join us at our lowly level next season their fans still turn up in good numbers.

When you put our relatively paltry gates against these clubs where does our incredible sense of entitlement come from?  Let's not deceive ourselves.  We are where we are for a reason.  We are not good enough to be higher.  We've all under-performed this season.  All of us.  As a club, from top to bottom.  Lumping all the blame on Marcus is simplistic in the extreme.

When we stop blaming Marcus, or Imraan or Latimer Park, and start turning up in the sort of numbers that comparable clubs do, we may start dragging our way back up the divisions.  If appreciable numbers of our "supporters" are waiting for Conference football or a shiny new ground before they deign to commit themselves again, there's every possibility this day will never happen.

You have to feel for Corby? Surely?

They dominated for 85 minutes against a very heavy-legged, one-dimensional Poppies, who only came to life for the last 10.

A Poppies team that determinedly refused to use the fine, flat playing surface lovingly prepared for them by Paul Knowles and team. Instead they continued to play in the whole-hearted manner adopted at bobbly Latimer Park, where merely getting rid of the ball into the night sky constituted a passing game.

Poor Corby fans who had to shunt and grunt across the county in a double-decker bus - known to be the most uncomfortable of vehicular conveyances.  Not only that, but they were kept waiting in the car park on said double-decker until we had celebrated and slowly made our way back to our coach.

And after all that, the final salt in the wound came from the Poppies equaliser, which was painfully offside.  Both of Rene's shots last night dribbled ineffectually in the vague direction of the goal.  His penalty was easily saved, but, thankfully, Aaron was, ahem, well placed to roll Rene's effort into the net, and get us back into a game we were never really in.

But, it's all in the past now.  No-one (other than Paul White who surely should be drug-tested) was especially bothered about the outcome.  Best of luck to Corby for their upcoming, far more important games, and hopefully the Poppies players can keep their minds off their forthcoming beach holidays for just three more games!

It's not ALL my fault! 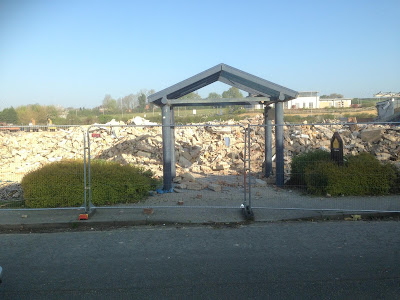 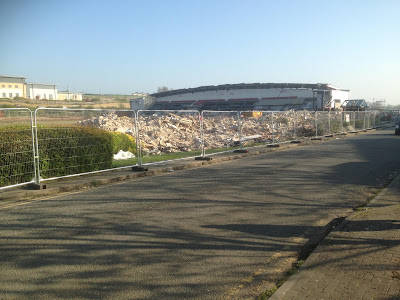