A sunny day in Cinderford

As this season drifts sleepily towards its conclusion (only another month to go!) here’s a little scene from Saturday’s trip to Cinderford.  James B putting in another good shift on the left flank, watched by a crowd that Donald Trump would probably describe as “yuge”.  In the distance, Wales. Not every day you can see two countries whilst taking in a game. Or go back 40 years, which is my impression of a brief tour of Cinderford town centre. 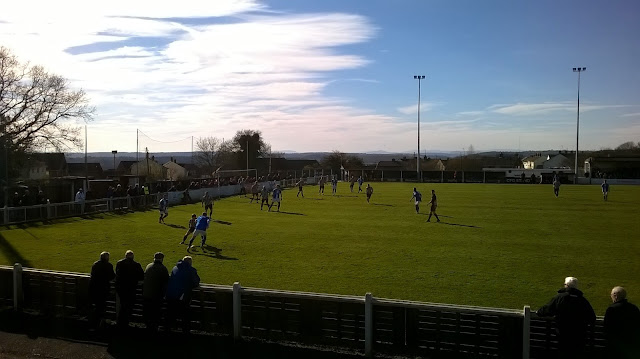 But it was a nice day and good views of the action could be had from the steep grass banks on two sides. I particularly enjoyed the performance art of one young supporter, who spent most of the second half trying to decide what to do with the little flag he had brought with him. When I say little, it was like a tea towel on a stick. First he tried to spread it out on the bank, but there was a bit of a breeze and it wouldn’t lie flat.  Then after about 15 minutes of that he began experimenting with resting the stick on top of a wall, only to find it wouldn’t balance.  By this point I was gripped.  Something happened on the pitch so I was momentarily distracted.  On looking back he had gone with plan C, back to the grass bank but this time sitting on one side of the flag to try to pin it down. Even that failed to work completely.  What now?  Just when all seemed lost, Brighton banged one into the net and the boy had a brainwave.  Wave the flag!

Mmmm - How are things progressing down the A6? 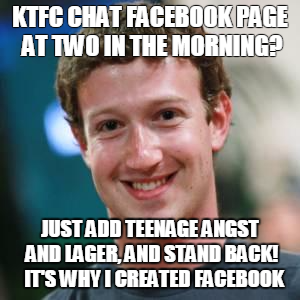 Some of our fans really need to get a grip.  We're not going up this season.  You know, most clubs in this division aren't.  Some are going to lose out in play-offs.  Some are going to bumble along to a mid-table finish.  Others are going to fight hard to avoid relegation.  A few teams will even BE relegated.

You know what?  These things happen.  It's called FOOTBALL.

Do some of our increasingly boring, teeth-gnashing fans believe every single season since 1872 has been unparalleled success and wall-to-wall brilliance?

Whenever I hear or read phrases like "worst ever game" or "worst ever season" I really do worry about the mentality of some people.  Six years ago we were regularly shipping several goals a game in front of barely three figures, with players moving at barely walking pace, and goalkeepers not diving just in case an injury leads to their next move falling through.

Since escaping Non Park, and limping through that season split between there and Steal Park, we have been building again year on year.  Play-off followed by promotion.  Followed by falling just short of the play-offs again.  Each season showed improvement.

And now this season has seen us plateau, and some fans are absolutely losing their sh*t!  Is it what any of us want?  Of course not.  Is it the end of Western civilisation as we know it?  Of course it bloody well isn't.  Not that an outsider would realise this if they read what some of the shrieking bile our young and not-so-young supporters are spouting after every defeat, and sometimes even after the wins!

No wonder Ritchie is looking to take more of a back seat!

Latimer Park - home of the Stars

Far too many people are focusing on the waste of a relatively new and supposedly well-appointed football ground.