The Rise of the Keyboard Warrior

Whilst the internet has given us many good things such as online shopping to avoid rubbing shoulders with the prols, PATGOD online (!) and access to top quality pornography from all corners of the globe, there has also been a regrettable downside. One of the most annoying things the web has spawned is the self-styled Keyboard Warrior. 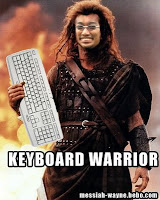 Once upon a time, if you wanted to have a go at someone you pretty much had to walk up to them and prod them in the chest whilst verbalising your issues. As time went by we became more civilised in these matters and resorted to written arguments, printed on paper and distributed. The original paper-based PATGOD was a vehicle for such activities. And if someone had an issue with anything written they could walk up to the person selling it and argue their point-of-view. And, if they happened to be the Club Chairman or Manager, they often did.

One by-product of this kind of face-to-face exchange is that you thought carefully about what you wrote before committing it to the printer. For example, everyone KNEW Mark English was as dodgy as a 5-day old pack of prawns left open in the sun, but you had to tread carefully around stating this as an outright fact. Bigger crooks than him had hid behind the libel laws for many years. At the time it was annoying, but at least it made you think ways of phrasing your criticism or seeming to temper your accusations through the medium of attempted-comedy and cartoons.

It is perhaps unfortunate that the modern commentator, hidden behind an anonymous pseudonym has no such compunction. Secure in their parent’s spare room the Keyboard Warrior is King of all he surveys. He knows all and tells all. His opinion is the only opinion. His worldview is the only worldview, and all others must bow to his will. And one day very soon, he might actually speak to a girl. 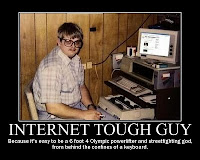 Online forums burn with his poorly punctuated words and opinions. Trivial discussions become weighed down with crushing decrees from on high. And varied opinion is replaced with abuse, threats and barely understandable text-speak.

Presently, Poppynet is under attack from a pack of fearless Warriors, augmented with disgruntled former club employees, and other axe-grinding hangers-on. Rumours and opinions are treated as hard facts. The Chairman is being hounded by a vociferous minority of brave Warriors, who seem hell-bent on forcing him out of Rockingham Road.

None of them can suggest how the Club might actually survive such an event, beyond a few vague suggestions about reconstituting the Club at a Sunday League level. Unfortunately, the survival of the Club post-Ladak would take a good deal more effort than griping into your PC, ordering pizzas online and arguing the merits of Kirk versus Pickard with a 10-year old kid in China. It would take real efforts in the real world, which is not a place the dedicated Keyboard Warrior visits too often.
Posted by GL at 12:57