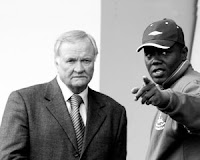 The ongoing saga of Morrell Maison’s post Poppies career has been a quiet affair only briefly enlivened by football club take-overs, beating up players, touchline bans and ousting by supporter organisations.

And yet when he was here he seemed such a likeable chap, had time for everyone, and a ready smile.

Except that is for the two occasions I happened to catch his attention. He didn’t come across as such a nice guy then, I can tell you!

The first occasion was at a reserve team game at Rockingham Road. You remember reserve team games? They tended to be held on a Wednesday night when the main stand was opened up to a combination of old foggies, people desperate to wring the last penny of worth from their season tickets and sad bastards with absolutely nothing else going on in their lives. Er.. and me of course.

Anyway, the game was in full flow, and although he wasn’t directly in control of team affairs Morrell strolled around the technical area with a cup of tea in hand, offering the odd word of instruction. Suddenly there was a comically poor decision given against one of our players. It was such a laughable bad decision I let out a surprised and inadvertent snort or derisive laughter. It appears I was the only person in the small crowd to find this passage of play so funny, and I let this noise escape me at the exact moment the ground fell into almost perfect silence. My exclamation carried across the ground quite audibly.

Certainly I seemed to find this incident funnier than Morrell did. I don’t know whether he thought I was laughing at his player, or didn’t like the sound of a fat bloke chortling loudly, but he gave me a stare of pure venom. It was a real Samuel L Jackson, bad-mother-f**ker look. I spent the rest of the game trying to avoid eye contact with our Manager and, more importantly, desperately trying to not find anything else on the pitch amusing – not as easy as it sound given that Darren Caskey was playing.

I put this down as a one-off until an away game at Worksop. This was the game where Anthony Elding received his 15th Poppies red card in only his 12th game for us and we slithered to a defeat, which pretty much ruled us out of play-off contention.

The team had indulged in a post match, halfway line huddle during which some of our supporters let them know how disappointed they were at the abject lack of effort, skill, and passion on display with various pithy phrases. As we continued to morosely file out of the ground, a curious feature of Worksop’s ground became worryingly apparent. In leaving the pitch the players walked straight across our path and into the dressing room. This served to quieten the mutterings amongst our brave terrace warriors. The players were mostly big buggers, and even if they couldn’t hit a barn door with a banjo there was no guarantee they couldn’t hit a double chin with their fists.

At this point one of our more forthright fans known only as Rover couldn’t resist making a final critique of the day’s events. Unfortunately for me, Rover, at barely 5 and half foot tall, was to my rear. Consequently when Morrell’s head snapped in the direction of this latest comment he locked eyes directly onto mine. “Thanks Rover!” Instantly Morrell started answering back and heading in my direction, I guess not to thank me for making the effort to get to Worksop that day. Thankfully Nathan Koo Boothe, in almost certainly his only decent challenge in a Poppies shirt, held back his irate boss and the players smuggled the snarling Morrell down the tunnel.

Twice I had come into the Manager’s line of vision and both times saw his ugly side. I wouldn’t have minded so much if I had given him cause on either occasion, but I was an innocent bystander both times. Given the way some fans shriek at our Managers week in week out to no effect I don’t know whether I should be disheartened or proud of my record!