Just a week to go before the Euros and a nation is gripped by expectancy.  That nation clearly being one of the other competing 15, because across the length and breadth of England, Euro-fever is noticeably absent.   St George’s flags may be everywhere, but the people waving them most enthusiastically  (dotty middle aged ladies, horsey types, the entire population of Eastbourne) are not gearing up for events in Poland & Ukraine, and the bunting will be safely packed away until the next royal occasion by the time our 11 remaining non-crocks take on France.

It seems that finally, after years of watching England teams stink out World Cups like a gas leak, everyone is determined not to get carried away this time.  In response to the inevitable question  - how will England do? – pundits and commentators are giving a nervous cough and NOT PREDICTING WE’LL WIN IT.  Some are even daring to suggest it might be an achievement to get out of the group.  A group containing Sweden.  What a change from talk of the Golden Generation.  True, Graham Taylor is saying he thinks we’ll do rather well, but this is the same Graham Taylor who told the public before Euro 92 to sit in their armchairs, make themselves comfortable, and watch us triumph.  As indeed we might have done if he wasn’t the manager, the players were considerably better, and we employed different tactics.

Euro 92 sticks in the mind as perhaps the last time England approached a finals with less than rampant expectation.  The Taylor factor had that effect, plus a team that boasted the talents of Andy Sinton, Carlton Palmer and Keith Curle. Anyone mercifully too young to remember that trio, just wait until the next repeat of one of those clip shows listing England’s worst players ever.  And in a spooky parallel, our group also contained France and Sweden.  Hopefully that’s where the comparisons end.  Hodgson will have to go some to match the lunacy of Taylor as he slowly unravelled during the matches, ending with the inspired decision, with time running out, to bring on Alan Smith, scorer of only 46 fewer international goals than the man he replaced.

The Euros and England have never really hit it off.  Maybe it’s all in the name – just too continental, and guaranteed to arouse suspicion and distrust.  Like their peculiar toilets and dodgy currency.  Almost the only time we have ever done well was when we happened to be at home, meaning the team never left Wembley and their nice familiar hotel.  Even the one exception, in 1968 when we actually finished 3rd (out of 4 finalists), was a ‘could do better’ for a team packed with World Cup winners. However it remains statistically our best performance since 1966, not to mention being the sporting backdrop for The Italian Job, so gets double points for that.

Ever since, our hopes have ended up spinning off the road just like that dangerously loaded bus, but with John Terry determined to show those Ukrainian racists who’s boss and Andy Carroll scoring goals for fun (on PlayStation), who knows, this could be our year. * 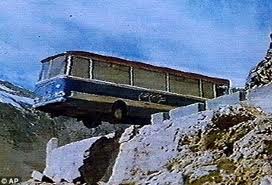 And to think this was one of our better Euro campaigns