Kettering - Playground of the Stars!

Our little corner of Northamptonshire has been waiting a long time for Hollywood to come calling – but no longer!!  When the Les Mis production crew were scouting for a location that conjured up 19th century France, naturally they headed up the A43 towards Geddington rather than fruitlessly searching across the Channel.  And so it was that proper bloody celebrity A listers got to spend a week of their lives in “Keddering”.

Boughton House may have been where the cameras were rolling, but the whole area was abuzz, agog and aflutter with star sightings.  Russell Crowe in Rushton!  Hugh Jackman in a Kettering gym!  An unconfirmed report of Helena Bonham Carter armwrestling in the Wayfarers!

For a town so starved of glamour that local boy Jim Dale still counts as our most famous export, despite a film career that ended in about 1972, and consisted of little more than saying “Cor!”,  this was like winning the lottery. 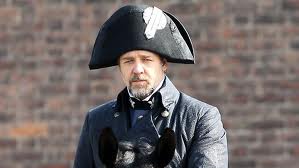 (Growls) “I will have my vengeance, m'sieur” – Crowe gets into character on set.

By all accounts the stars were refreshingly approachable. In between takes, Wolverine star Hugh pumped iron with local bodybuilders in School Lane, in the very room where I once attended cubs!!  Meanwhile Russell managed to get through the whole week without punching anyone, and even borrowed a bike to pedal over to Northampton.

We’ll have to wait until the premiere to learn if Russ's renowned ear for accents produces a Frenchman every bit as convincing as his Robin Hood, which only occasionally strayed into Geordie or Irish. With a bit of Aussie cockney. 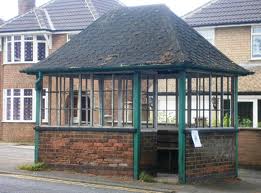 Maximus may have cycled past this very bus shelter. Or one like it.

Meanwhile, with its usual efficiency, Kettering Borough Council is already talking about creating a Hollywood walk of fame to commemorate the famous visitors, during their fleeting visit to the area.  They’ll be taking that forward to the next discussion phase just as soon as the feasibility sub-committee has reported back with its preliminary recommendations.
Posted by PW at 18:35